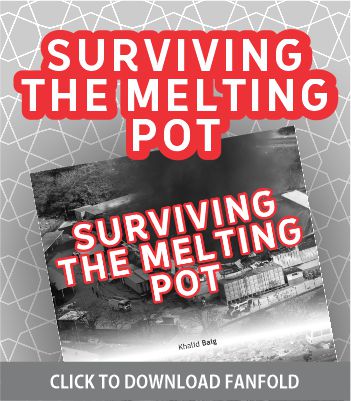 Muslim immigrants first came to the western countries more than a century ago. In Australia they went as Afghan camel drivers. In the U.S. they went variously as Lebanese autoworkers and Punjabi farmers (not to mention African slaves). These earlier Muslims worked very hard to serve these lands. They built roads, opened access to mines, and performed gruelling work to till the land or run the factories. Their great contributions and economic successes aside, they had one glaring failure: they failed to build Muslim communities that could last. Their descendants disappeared into the 'melting pot.' Today one cannot find the Muslim children of these earlier Muslims.

Another wave of Muslim immigration started after the Second World War and gained momentum during the last three decades. Will the children of these immigrants survive as Muslims in a land that has a history of assimilating people of all faiths or will they too meet the fate of the children of earlier immigrants? Today the 'melting pot' is hotter than ever, the popular culture is stronger than ever and the influence and reach of the media in promoting the popular culture is greater than it ever has been. What is the chance of survival for those being raised in the eye of the storm?

It can happen but it will not happen without properly guided effort.

Here is the advice from the scholars.

Salah (obligatory prayer) is the most important obligation of a Muslim. It is impossible to build a wholesome life without this pillar. As the Hadith says, “Salah is the pillar of religion. Whoever destroys it has destroyed the entire religion.”

In the ex-Soviet Union and other Communist countries, it was a 'crime' to offer Salah. Those who prayed did so secretly and at great personal risk. In the Western countries, there is no such barrier. Those who fail to pray regularly have nothing but their own laziness or weakness of faith to blame.

We should be regular in performing other religious obligations as well. In addition, we must allocate time for reading the Qur'an and good religious books in our daily schedule. To survive in a non-Muslim environment, says Maulana Yusuf Ludhianwi, “all these are as important as food and medicine.”

A concern for Halal and Haram consumption is not only an important obligation, it is a prerequisite for building a wholesome Islamic life. The Qur'an says, “O Messengers! Eat things good and pure and act righteously.” [Al-Mu'minoon 23:51]. At-Tayyibat (good and pure) is a beautiful way to refer to Halal as Haram things are not good or pure. This verse teaches us a very important fact. Physical actions have moral and spiritual consequences as well, thus eating Halal is necessary for leading a life of righteousness.

Science, by definition, cannot go beyond the physical world in its explorations. Those who are ignorant of the limitations of science and therefore seek guidance from it in areas where it is unable to provide any, get easily confused on this issue. “Why is pork Haram?” they might ask. Answer: Because Allah said so. And He said so because it is detrimental for our moral and spiritual health.

A glass of water may look clean, but if somebody tells us that it contains a poison or virus, we would not touch it. Haram is the same way, only more so. Whatever Islam has declared as haram is as unsafe as poison, although it's poisonous consequences will be apparent in the Hereafter.

Today the entire world is in the grip of rampant materialism. But it is more corrosive in its birthplace. In the Muslim world, materialism is rampant but is considered a vice; people are not (yet) presented as role models simply because of their wealth. Over here (in the West) it is a virtue; the life styles of the rich and famous are an object for adulation. Additionally, Maulana Yusuf Ludhianwi (R) cautions: “Never allow yourself to be impressed by the great worldly possessions of a non-believer. If you realize the eternal doom that disbelief promises, you will feel pity rather than envy.”

The tremendous interest in question and answer columns in newspapers, magazines, and on the Internet is a sign of the concern of Muslims for religious guidance and for doing what is right. The downside is that all sorts of “experts” have also sprung up to dispense legal opinion and religious guidance.

This state of affairs is a result of general ignorance of even basic religious teachings among today's “educated Muslims.” Additionally, there is a commonly held opinion that the person giving a wrong fatwa is responsible for it, not the one who follows it.

Actually, we are responsible for searching for the authorities carefully before we put our trust in them. We do so in other realms of life. We do not accept medical advice simply because the giver appeared to be a doctor. We ascertain qualifications before we accept advice. Fortunately, that profession is generally regulated and we don't have to deal with unqualified practitioners very often. In case of religious guidance, it is up to us to exercise the same caution.

Justice, honesty, integrity, kindness, sincerity, and truthfulness are important qualities of a good Muslim. He should be a man of principles, a source of good. According to one hadith, the believers are like rain, spreading their goodness wherever they go.

It was these qualities of the Muslims that opened the hearts of millions of people in Asia and Africa to the truth of Islam. People knew the tree of Islam by the fruits of the good conduct it produced in its followers.

The above are necessary for building a strong Muslim home. However, we need to do more to ensure that our children do not step out from our tiny islands only to drown into an ocean of Godlessness. Two of the greatest evil influences come in the name of entertainment and education. First is television and we must protect our children from it. The second is the secular education system that forcefully promotes ideas that are totally anathema to Islam to those most impressionable and least able to question them. Muslims must develop their schools that teach all subjects in an Islamic context. On both of these issues we have shown scant awareness.
Yes, we can survive as Muslims in the West, but it won't happen without properly guided effort and the time to act is now!