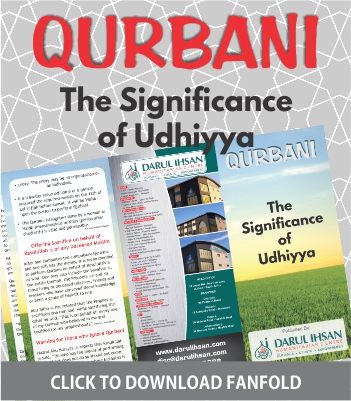 The central theme of Eid-ul-Adha is submission to the Will of Allah Ta'ala and sacrificing everything for His pleasure. Ibrahim u exemplified this spirit of submission and sacrifice in the best possible manner. When confronted with the challenge of love and allegiance, he chose to submit unconditionally to Allah Ta'ala and suppressed his personal desire and love for his family and child.

Hence, sacrificing an animal on Eid-ul-Adha is an act that symbolises this philosophy and gives one the opportunity to fulfil a Sunnah in emulating the Noble Prophets (AS).

Qurbani calls for the slaughter of one's innate desires by placing the knife of courage, patience and obedience on the ego that lurks within every human. It calls for the annihilation of hatred, jealousy, pride, greed, animosity, love for the world and other such maladies of the heart. Qurbani is a reaffirmation of the pledge:

“Verily my prayer, my sacrifices, my life and my death are solely for Allah; the Rabb of the worlds.” (Surah An'aam)

Zayd lbn Arqam (R) reports that the Sahabah (R) once asked, “O Rasulullah (Sallallahu Alaihi Wasallam), What is Qurbani?” He replied, “It is the Sunnah of your father lbrahim (AS).” They again asked, “What benefit do we derive from it?” He answered, “A reward for every hair (of the sacrificed animal).” “And (what reward is there for animals with) wool, O' Rasulullah (Sallallahu Alaihi Wasallam)?” they asked. “A reward”, he said, “for every fibre of the wool.” (Ibn Majah)

Rasulullah (Sallallahu Alaihi Wasallam) said: “There is nothing dearer to Allah Ta'ala during the days of Qurbani than sacrificing of animals. The sacrificed animal shall come on the Day of Qiyamah with its horns, hair and hooves (to be weighed). The sacrifice is accepted by Allah before the blood reaches the ground. Therefore sacrifice happily with an open heart.” (Ibn Majah & Mustadrak)

On whom is Qurbani Wajib (obligatory)?

Qurbani is Wajib (obligatory) on all who fulfill the following three conditions: Muslim who is of sound mind - mature (has reached the age of puberty), a Muqeem (a Shari traveller is exempted from Qurbani) one who possesses wealth in excess of one's basic needs and debts that is equivalent to Zakah Nisab on any of the three days of Qurbani. It is not necessary that this amount be in one's possession for a complete lunar year. (Ad Durrul Mukhtar)

Qurbani is not incumbent on a child or an insane person nor is it incumbent upon their guardians to perform it on their behalf. (Ad Durrul Mukhtar)

Similarly, it is not Wajib on a musafir (one considered a traveller in Shariah) . (Hidayah)

NB. If Qurbani is Wajib, the obligation must be executed. Compensation or sadaqah cannot be given in lieu of Qurbani. If Qurbani was not offered due to ignorance, negligence or for some other reason, then it is Wajib to give in Sadaqah the price of the Qurbani animal or the unslaughtered animal itself to the poor. (Ad Durrul Mukhtar)

When should Qurbani be performed

The time for Qurbani commences after the Eid Salah on the 10th of Zul Hijjah and ends at the setting of the sun on the 12th of Zul Hijjah. It is better to make Qurbani on the first day. (Ad Durrul Mukhtar, Sahih Bukhari, Muatta Imam Malik, Al Bahrur Raaiq)

In rural areas where Jumu'ah and Eid Salah are not performed, Qurbani may be performed as soon as Fajr (Subhus Sadiq) sets in on the 10th of Zul Hijjah. (Ad Durrul Mukhtar, Sahih Bukhari)

If a person who resides in a town (where Eid Salah is performed) arranges for his animal to be slaughtered in a outlying area (where Eid Salah is not performed), then it is permissible for his animal to be slaughtered before he performs his Eid Salah. If the Qurbani has been offered before the 'Eid Salah, it will have to be repeated. (Ad Durrul Mukhtar, Sahih Bukhari)

It is preferable to slaughter during the day. (Ad Durrul Mukhtar)

A man may purchase an animal for his wife from his wealth with her consent. (Ad Durrul Mukhtar)

It is Mustahab (preferable) for a person intending Qurbani not to cut/trim the hair and nails from the first of Zul Hijjah until after the animal is slaughtered. (Sahih Muslim, Ahsanul Fatawa)

Qurbani will be discharged if one appoints a proxy. The proxy may be an organisation or an individual.

If a traveller returned home or a person acquired the required wealth on the 12th of Zul Hijjah before sunset, it will be Wajib upon the person to perform Qurbani.
The Qurbani (slaughter) done by a woman in Haidh (menstruation) or Nifas (period after childbirth) is valid and permissible. (Fatawa Mahmoodiyyah)

After one completes the compulsory Qurbani, and one still has the means, it is recommended to perform Qurbani on behalf of Rasulullah (Sallallahu Alaihi Wasallam) as well. One may also include the Sahabah y, the entire Ummah, the Prophets u and all those living or deceased relatives, friends and teachers who have conveyed Deeni knowledge or been a cause of benefit to one.

Abu Talha (R) has related that the Prophet (Sallallahu Alaihi Wasallam) sacrificed one ram and while sacrificing the other he said, "This is on behalf of every one of my Ummah who believed in me and testified (to my prophethood)." (Tabrani, Mustadrak)

Warning for those who Ignore Qurbani

Hazrat Abu Hurayra (R) reports that Rasulullah (Sallallahu Alaihi Wasallam) said, “He who has the means of performing Qurbani but does not do so should not come close to our Eid Gah (place where Eid Salah is performed). (Ibn Majah)